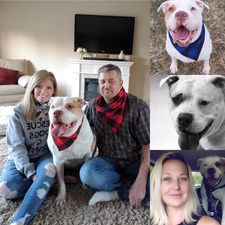 In April, we held a contest. This contest was in honour of animals that are kind and loving and the people who have also changed the lives of our furry (and sometimes slimy) friends. The following nomination came in.

Nomination: This is Triton. He is one of the more memorable dogs I’ve had the pleasure to work with during my shelter and rescue work.

Triton spent over two years in the shelter and although people loved the way he looked because of his past he simply couldn’t trust everyone and could be frightening to people. I felt honoured that he chose to Like and trust me it took time and cheese to win him over lol. I loved taking him for car rides we would drive & play classical music. He loved it!!! Triton had a special fondness for Kim and Brian as they did for him. After much time went by in the shelter over two years and a failed adoption in which he was returned to the shelter Kim and Brian decided to foster him. He has never had a bigger smile on his face. Sadly shortly after they took him home he was diagnosed with lymphoma. Several volunteers have chipped in to help pay for his treatment and Kim and Brian have extended their efforts to raise money so he can have the treatment and live his days happy and in a home—he is doing well all things considered. Kim Souliere Hardy & Brian Hardy took a difficult dog that nobody wanted and gave him his best life.

On April 30th, we held a draw for our April contest on the kindness of and to animals. Right before going live we were saddened to learn that Triton, had unfortunately crossed over.

We were hoping for the stars to align and that Kim and Brian might win something in the contest; something to remind them that they were seen, respected, and surrounded by people who both respect them and were inspired by them. Of course, on the last spin, Kim won a Sunshine Park Sweater. We were so thrilled to award this prize. But the story didn’t stop there.

One of our other winners was also touched by the story. She won a beautiful jewelry set from C.J. ROCKER and when we confirmed her shipping address, she responded with the message below.

It’s little actions like this that create a ripple of kindness. Selfless acts that make a whole world of difference in the lives of others. We applaud our community for paying it forward, for showing up, shouting out, recognizing others, and for being the kind and loving souls we are so privileged to walk alongside.

If you know a story that will put a smile of someone’s face, reach out. We’d love to share it with you!

Meet a local Good Samaritan standing up to Anti-Asian racism

Edmonton donair shop offers some delicious kindness to a stranger