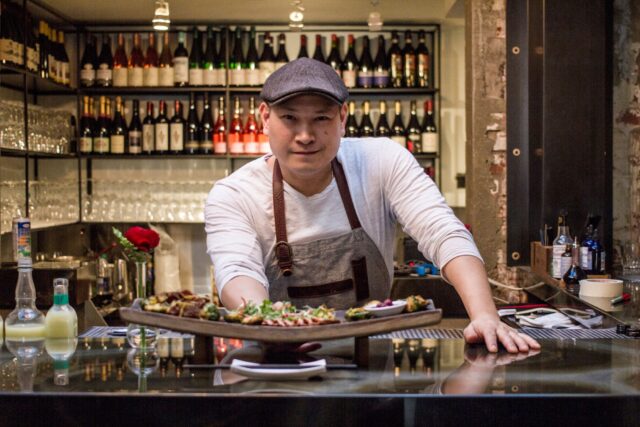 DaiLo. (大佬 \ Cantonese \ noun \ dī-(,)lō): big brother; a term of endearment to show respect and love to an elder; a nod to the ways and tastes of older cultures and generations; implies a connection to future generations. Or, big boss; bad-ass.

If you are lucky enough to call Toronto, home. Or if you’ve ever visited this great city of ours, you have likely dined at one of our critically acclaimed restaurants, DaiLo. Ranking in the top 20 on the prestigious list of Canada’s Top 100 Restaurants for two consecutive years, promoted on Air Canada’s, En Route, not once but twice, and most recently, having the restaurants chef, Nick Liu featured on The Food Networks, Wall of Chefs.

Being a prominent leader in the New Asian Cuisine movement which has grown in popularity exponentially, Canadian born chef Nick Liu is distinguished for his elegant handling of bold Asian flavours with traditional French techniques. Liu is the masterminds behind not only DaiLo, but Little DaiLo, a mini version at Assembly Chef’s Hall and LoPan, a trendy bar offering bar eats above DaiLo. Not only is he a culinary genius, he’s also a very genuine and humble person, making him a true force to be reckoned with in the Canadian food scene.

We asked Liu seven questions and we absolutely loved his responses.

“I’ve had the pleasure of cooking for some of the most important people in the world like Prince Charles, Jane Goodall…and some A-List actors (also very important people!) Matt Damon and Jennifer Lopez.”

Can you tell us about your journey as a chef and restaurateur? What have been some of the struggles and some of the highlights of your career?

My first time in a kitchen was during a high school project where I shadowed Chef Brad Long from the CN Tower. When the project ended, he offered me a summer job. This was my very first experience/job working in a kitchen. It’s where I fell in love with cooking. I went on to study at George Brown after that and ended up getting an internship at Scaramouche, which also turned into a job; I worked there for nine years and while I was there, had some amazing culinary travel opportunities.

Some of the places I travelled to during this time included a one-year sabbatical in Italy. I later also spent time in England, Spain, Australia, Fiji and Germany. When I returned from my travels, I took a Sous Chef position at Splendido working with Chef David Lee. This is where I had the opportunity to do even more travelling, which was a major highlight for me. We went to Singapore and worked there during two-week long event. When I left Splendido, I went to Thailand and Malaysia for some time. When I came home, I took over as Head Chef at Niagara St. Cafe. I was the Executive Chef for four years then opened up a series of pop-ups called GwaiLo. I did the pop-ups for two and a half years and after finding the right partner opened DaiLo in August 2014.

Some of the struggles I’ve had over the years include working the long hours, holding relationships (due to the long hours) and finding the right partners to go into business with. This was a big one because I wanted to be sure I had the right team with the ability to support me in the business. Once I finally found that group though, we clicked and made magic happen at DaiLo.

In terms of highlights, I would say I’ve had the pleasure of cooking for some of the most important people in the world like Prince Charles, Jane Goodall, the President of Mexico, the Governor General of Canada and some A-List actors (also very important people!) Matt Damon and Jennifer Lopez. I’ve also had the honour of cooking for some of the best chefs in the world like Keith Froggatt, Hudson Blumenthal, Gary Rhodes and Fergus Henderson.

“…it’s made us more “team-focused” as opposed to the competitive nature we had previously.”

The pandemic forced us to pivot into a takeout concept. Overall, it made us extremely flexible. We had to be nimble and adapt quickly to launch new concepts and get them underway.

I think for the culinary community, it’s made us more “team-focused” as opposed to the competitive nature we had previously. I would say the chef community has been brought closer; we’re often checking in on each other, talking about what’s new at our restaurants and sharing some of the things we’re learning as we go. We’re all just trying to get through this together.

For our staff at DaiLo, it means we’re constantly working to ensure staff are safe and healthy. It’s also changed our perspective as business owners; our mindset has had to also pivot from being focused on profit margins to just making sure we’re not losing money month-over-month. Although I’d say we’ve done well, we’ve definitely been in survival mode for the past 12 months.

Post pandemic, there will be a lot of changes. The most glaring is that we’ve lost some amazing restaurants in Toronto. Our food scene is forever changed by this. Some of the city’s staples that people would always go to have permanently closed down. I expect this will make other restaurants busier. Where reservations were already hard, it’s going to become even harder since we’ll be reduced to less seating and less restaurants to choose from. My hope is that out of all this, we change the way we run restaurants to be more sustainable workplaces for employees and people working in our establishments. We make it a priority at DaiLo, but I want to see more restaurants that pay fair wages and invest in their staff’s health.

3) How have you been able to find inspiration, in your daily life as well as your work life, during these difficult times?

Cooking at home is my main source of inspiration! Since I can’t travel, I spend time speaking with chefs overseas or in the US, all people I’ve cooked with before. We talk a lot about how they’re handling things and how they’re staying inspired. Chatting with like-minded chefs around the world is a great inspiration and motivation for me.

4) I’ve personally dined at DaiLo and LoPan numerous times, I consider them two of my favourite restaurants. I mean, that 45 day aged ribeye, and of course, the Big Mac baos, I’m literally drooling.  How have the restaurants been able to find creative ways to keep business flowing. How can Torontonians support?

Our job at DaiLo is to continue creating culinary experiences for our customers. We take a great deal of pride in what we do and during the pandemic, we’ve worked to create as many points of access and experiences as possible. Things like our bespoke cocktail kits created by our Bar Manager Shannon Marshall, our Lunar New Year takeout tasting menu, offering an a la carte menu for those who just want a few bites, having a sake and wine list available, or even our weekly DaiLo Noodles pop-up. Every single one of these are an income stream that can add to our bottom line. They’re exciting projects to work on and they’ve been very well-received and for that we’ve been so grateful.

Torontonians can support by continuing to order for takeout, on Uber Eats and Door Dash. Most of all, we look forward to hosting everyone at DaiLo when it’s safe and restaurants can open again!

“Canada is DaiLo on a plate.”

5) Toronto has been the perfect setting for your restaurants.  Vibrant and multicultural driven, we love trying new foods.  What does Canada mean to you.  Can you tell us a bit about your heritage?

For me, Canada is DaiLo on a plate. All these experiences I’ve had growing up in Canada and being allowed to explore my culture has inspired what DaiLo is. In a sense, the inclusive vibe of Toronto is a testament to the success of restaurants and chefs that aren’t just doing French or traditional foods.  I was born in Canada with a mom that was born in South Africa and Dad born in India. Both are Chinese and growing up, I was brought up eating Chinese and Indian food. This really informed my knowledge and interest in different cultural cuisines. Growing up, it was a rare treat to go to McDonald’s!

6) Share with our readers who haven’t dined at DaiLo, a little bit about the foods you offer.

We are advocates for local, home grown foods. We believe in supporting local farmers and producers as much as possible and also grow and forage for our own ingredients. At DaiLo, we have a rooftop garden and beehive apiary. Whether it’s our soy protein or in-house pickles, everything is made from scratch, which is why most of our dishes take hours of preparation before they hit the plate.

A lot of dishes from DaiLo stem from family recipes and traditions. We like to take certain recipes and add a modern touch, but everything served at our restaurant was first enjoyed at home.

7) And lastly, the dishes and the ambiance all feed into the overall experience of dining out, it’s a true balance to get everything right. Can you us about the DaiLo experience?

We are all about experiential dining! When you visit DaiLo, you forget about where you are and what country you’re in. Our attention to detail and service make you relax and leave your problems at the door. It’s something that will take you away, it’s like reading a book. You’ll try all these things that you’re not familiar with and you’ll enjoy the entire experience. We like to make food approachable/not stuffy so that when you step through our doors, there’s a feeling of familiarity.

More than ever, small businesses need our support. They are the glue that holds our wonderful country together. If, I may suggest, order take our from a neighbourhood restaurant tonight. We highly recommend DaiLo.

There is Good News Out There

What would you have done?