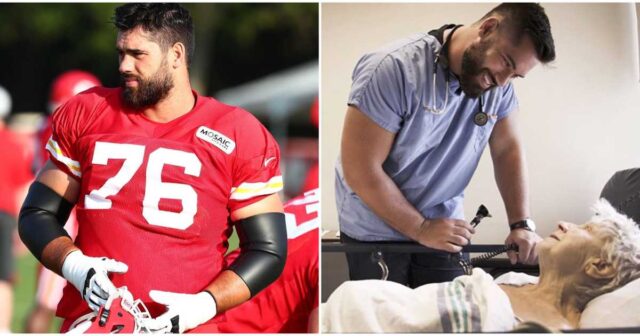 Laurent Duvernay-Tardif misses football. Many sports fans do. But this story has a major tear-jerking twist.

While the Kansas City Chiefs prepared for an AFC divisional round game with the Cleveland Browns their teammate Laurent Duvernay-Tardif helped an elderly resident who had tested positive for COVID-19 transfer to the COVID floor at the Canadian long-term-care facility where he now works.

Few of us ever achieve the dream of becoming a professional NFL player. Never mind winning its most prestigious honour, the Super Bowl. But there are even fewer, maybe just a handful or less who also graduate from medical school. And then opt out of the NFL 2020 season to help on the frontlines of the battle against COVID-19. There is only one; Laurent Duvernay-Tardif. Just thinking about his immense sacrifice brings the waterworks. Meet a true Canadian hero. But you would be hard pressed to convince this NFL player turned MD that he deserved that title.

“Nobody’s there to cheer them on.”

Duvernay-Tardif called his co-workers who have worked at the part-time elders care facility near Montreal for years “the real heroes”. “Even after given bad news, they came back with a smile to help”, he told the Toronto Star.

“Those people are so dedicated, it’s crazy,” he said, via the Star. “It’s easy to go train and live and work out when you’re getting paid a ton of money to do it, and there’s thousands of people that are there to say, ‘Good job. You’re doing great. You’re so good.’ But to wake up every morning to go to the long-term-care home and do the work that they do, with the amount of passion and dedication that they have, that’s true heroics. Nobody’s there to cheer them on.”

He told the Canadian Press he thinks he’s given “too much credit” for deciding to work on the front lines and his “definition of a hero has changed this year.”

“Who am I to deserve that?“

“I’m 100 per cent sure I made the right call but I feel like maybe people give me too much credit for making that call,” he said. “I know what it represents … but I feel my definition of a hero has changed this year.

“I was very grateful to get those awards but at some point you always feel bad and think, ‘Who am I to deserve that?’ You look at what you did and it wasn’t nearly as much compared to that nurse or that orderly. Ten years from now I’m going to be, ‘Wow, 2020 was probably my year and it was amazing to get all that recognition,’ but I feel they (front-line workers) are the ones who should get it. They’re the people who really deserve it.”

Nobody would have faulted Duvernay-Tardif for returning to the sport that he so loves. To choose to go back to the very place the most hard hit by the pandemic. To witness firsthand the catastrophe of the virus on our seniors every single day, all because he wants to help, even if that’s performing tasks like changing diapers, show that he is most deserving of the Sportsperson of the Year Award that was awarded to him late last year. As we said, a true Canadian hero.

Watch Duvernay-Tardif tell it in his own words.