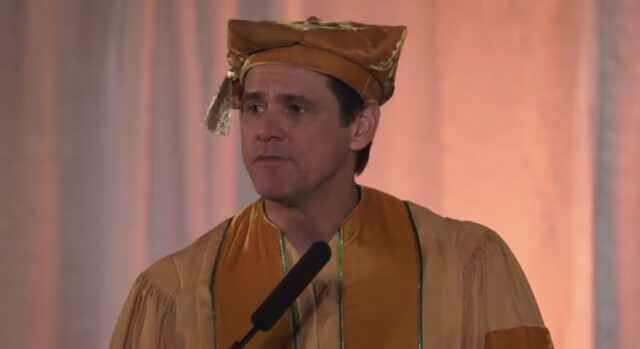 Canadian actor and comedian, Jim Carrey wishes more people could realize “all their dreams and wealth and fame,” so they can “see that it’s not where they’re going to find their sense of completion.”

Carrey, born James Eugene Carrey, gave some of the best life advice to the 2014 grads of Maharishi University of Management (a consciousness-based university).  And though his words of wisdom are now 6 years young, they are even more relevant now. With so much noise and fear in the world, Carrey’s guidance shines through.

The actor talked about the lessons he drew from his father. There is something about watching your own father not realize his dreams that cuts at the heart:

“My father could have been a great comedian, but he didn’t believe that that was possible for him, and so he made a conservative choice. Instead, he got a safe job as an accountant. When I was 12 years old, he was let go from that safe job, and our family had to do whatever we could to survive. I learned many great lessons from my father, not the least of which was that you can fail at what you don’t want, so you might as well take a chance on doing what you love.”

Our favourite funny man goes on to remind us that the universe is always listening, even when she seems hard of hearing.

“The decisions we make in this moment are based in either love or fear,” he continued. “So many of us chose our path out of fear disguised as practicality. What we really want seems impossibly out of reach and ridiculous to expect so we never ask the universe for it. I’m saying I’m the proof that you can ask the universe for it. And if it doesn’t happen for you right away, it’s only because the universe is so busy fulfilling my order.”

And thus, my friends, let us fly forward without fear. Let us have patience. And let us trust that whatever it is we dream of is making its way to us. Patience. The best is yet to come.

The Energy of the Universe: a Timely Email

Young Canadian College Grad Has Positive Message for the World

A dog, a locked car and a kind stranger