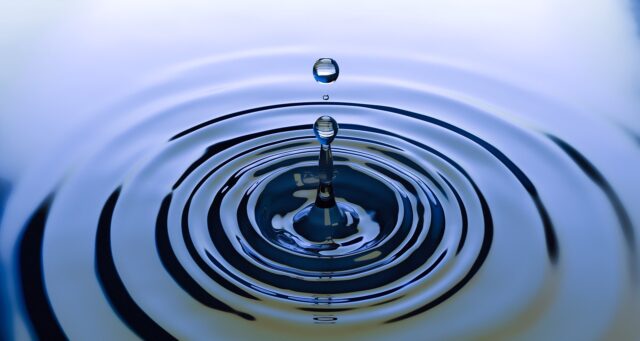 At the time, it was difficult for me to envision this. Surely, holding the door open for someone or giving someone a boost in a parking lot was not making waves, and these actions certainly would not make world news. At the time, I didn’t understand the concept of the residual, lasting effect of positive energy. I was intrigued by the notion of ripples in the ocean, however, and I never let go of that concept.

As I grew older, I started to understand how energy moves in the world. Not to get all ethereal, but if we think about objects, matter as a whole, it’s all essentially just a form of energy. If we think of water, for example, it is a form of energy in constant flux. It goes from solid to vapour to liquid—it never stops changing and shifting and evolving. The same applies to the energy of emotions. The energy never really dissipates, it just takes on different forms.

If we think of this in context to positive action, like holding the door open for someone, offering someone a compliment, or coming to someone’s aid when they are in clear distress, we may not see the immediate effect of the action. That person may not even say “thank-you”. But perhaps your action changed their energy ever so slightly, arguably for the better. Positive action can have a long-lasting residual effect, and the person on the receiving end may even pay it forward, causing a further ripple.

So let’s scale up for a second. The news has always been full of a lot of negativity. People being cruel, hurtful, angry… for some reason, we as humans tend to lean into bad news. If it bleeds, it leads.

But I think on the whole, we’ve become desensitized to bad things happening. We’ve come to expect it. Normal behaviour seems to veer towards people being awful to one another. Sadly, this has become the default behaviour. And now people have become numb to it. It’s dangerous.

Even so, people also have the tendency to rally around good news stories. Whether that’s because it’s so much rarer to see good news over bad, or because we’re all desperate to see something positive happening in the world, or a bit of column A and column B.

When there’s good news, such as a group of Canadian teens pushing a stranger’s car 7km to get her home safely, people gravitate towards it. It may be because they want to believe that there are still good people in the world, especially young people. They want to believe that if they are ever in distress, someone will not just pass them by. They still believe fundamentally in the goodness of people—that we’re not all bad and that we’re ultimately equipped to turn our inherent negativity around.

That’s what this forum is about: amplifying good news. Even the low-profile stories about people holding doors open for one another, should be talked about. These actions matter. The more we talk about the good things that are happening in the world, the more we will be able to sustain the belief that kindness, gratitude, and ultimately, love—will prevail.

And it all starts with the smallest of actions. Because the ripple effect is real. I’m still feeling it today, even more profoundly, as an older man.

Do I believe that every kind-hearted action carries all the way to the other side of the world? Well, I can’t be sure. I just know it can’t hurt anyone.

A Toronto woman received a card from a secret admirer every Valentine’s Day for...

Toddler without hands gets a puppy without a paw

Inmates prove three important lessons that we should all remember