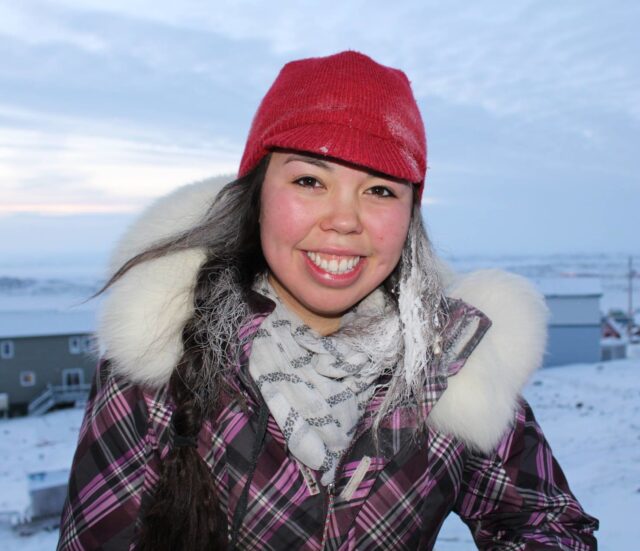 Enooyaq Sudlovenick, A PhD student has received a prestigious award for her work studying belugas in the Northwest Territories and Nunavut.

Weston Family Award winners undertake research projects across a broad spectrum of fields and disciplines in the natural sciences, including studies of northern ecosystems, biodiversity, flora and fauna, meteorology, oceanography, glaciology, geography, and environmental studies. Enooyaq Sudlovenick, who was raised on Baffin Island, Nunavut, is one of the 2021 recipients of the Weston Family Award in Northern Research.

Sudlovenick, who studies at the University of Manitoba, looks in-depth at the health of beluga populations through the lenses of both Inuit knowledge, or Inuit Qaujimajatuqangit, and western science.

Incorporating both perspectives “just makes for a better project overall,” she explained to Cory Chibry on CBC Radio’s Northwind.

“It’s great to look at a question you’re thinking about from different angles. Who better to ask than the local hunters, harvesters, and elders?” she said.

As she’s progressed through her studies, Sudlovenick has found herself drawn again and again to the Arctic marine animals she came to know as a child, researching Arctic char, followed by ringed seals, and now belugas.

“All the animals I’ve worked on are important to Inuit,” she said. “I grew up fishing, I grew up hunting seals … and even beluga hunting in the bay here.”

She says that with climate change posing a new threat to wildlife populations, “we need to know how they’re doing.”

Read the full story at CBC.

What can polar bears teach us about polar opposites?

Senior takes over a thousand Thank-you cards to truck stops during pandemic to show...

COVID survivor Mary Peel turns 106 on Wednesday. Her family has a surprise for...