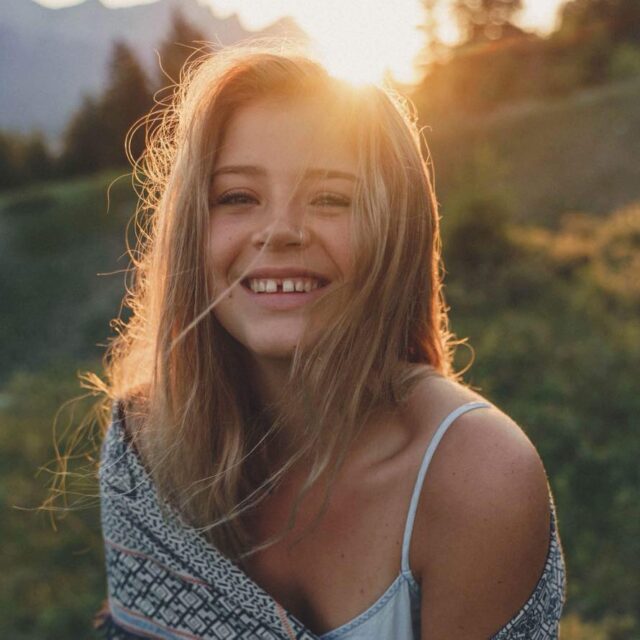 Born and raised in Canmore, Alberta, Liv learned early on that there is a religion to be found in the great outdoors, to trust in nature, and in the power of intuition and spirit. She learned that what some call “fluff” others called “force” and she felt the calling at a young age to become a midwife. If you scroll her social media feeds, you’ll find snips and clips of her strumming along to original tunes, and more importantly, constantly advocating for people who might not have a platform great enough to plead for justice, and for practice that is grounded in centuries of wisdom.

Olivia Tupper is a soulful woman who has packed so much into 22 years that it makes me ambitious for my next 22. What stands out most is Liv’s focus and drive in pursuing her dreams. She’s no stranger to pivoting and side stepping when things don’t go as planned. She’s worked hard to get where she is (in the final stretch of her midwifery program) and she’s committed to finishing this degree in a way that will make her the best midwife in the years to come. To be the best, she chose the hard way. While Liv dreamed of catching babies in rural towns, she chose to stick to big-city births so that she could experience a broad spectrum of deliveries.

Liv’s heart isn’t all wrapped up in catching babies. She has taken the stage at Canmore’s Folk Festival for years, she composed a tune, She Roars, that caught the attention of hundreds of thousands overnight, she’s risen from some of life’s hard knocks, and she can shred the trails on her mountain bike or skiis like no other. She’s all that, plus some.

I had a chance to catch up with Olivia and we got to jam on some juicy questions that invite us to know her a more intimately.

If you had an extra hour in the day, how would you use it?

Liv: Exercising and Meditating. I have so much trouble exercising these days because I’m always called out of my bed in the middle of the night or I’m waking up the second I have to leave. I’m always like, lacking sleep. And so it’s always just waking up and leaving and I feel like it’s so hard to be really well adjusted to everything and cope well with the amount of stress, without being able to exercise ever. I would just love to have an hour, where I know I can get really sweaty and then meditate and not be paged. It’s so hard to just get into a Zen zone if you are expecting somebody to page you and tell you they’re feeling pushy. I feel like my mental health would be great if I could have an hour of protected time.

What is the best advice you’ve ever been given?

Liv: A couple of years ago when I was deciding where I wanted to finish my training, I was visiting with my close friend, a very wise spirit guide for me who is the mother of my goddaughter. And I was going through my options; I could have this beautiful placement in the country and have all these intervention-free home births, and it would just be this beautiful idyllic midwifery experience. Or I could do this city placement in a really conservative community and it would be really hard and not my ideal way of practicing but I would probably learn some hard lessons and experience with more complicated births. My favorite thing she said was that you just have to walk into the fire and embrace where it’s the hardest because you’re going to come through the other side with exactly what you need. And so all the time, I just tell myself I’m just walking into the fire. I’m just doing it. I’m just walking into the fire. And I think it’s a grounding affirmation for me. I come back to that advice often.

If you were a fly on the wall whose room would you like to be in. And what would you hope to hear?

Liv: I would like to be a fly on the wall of the apartment my parents were in the first time they met each other. I have heard that love story so many times. And it’s just such an iconic love story. I would just love to see them meet each other for the first time. It would just be really cool. I always imagine them as young people falling in love. These days, I think they’re the same in that they are smitten with each other. But I think that’s about it. In many ways, I imagine they’re so different now. I think they’ve grown so much.  They had us so young and I think they really transparently grew and evolved in front of us. They’ve had arguments and worked through things in plain view of us, so we got to watch the process. My mom always reflects on her growth to me, you know, “Before I thought this way. But then I learned to let go of this and that, and my life’s amazing now. I wish I knew this when I was young.” It’s been really cool from a life perspective and a parenting perspective to witness them kind of growing up with us.

i am mine before i am anyone else’s. – Nayyirah Waheed (Respond)

Liv: That resonates dangerously. I think a sense of self is so important to be able to be helpful or good to anybody else in the world. It’s being strong with your core, your whole being, and with your boundaries as well. Your commitment to yourself and your well being … that reflects towards your interactions with other people and it will only serve their relationships with you if you’re healthy. I feel like I have these kinds of conversations with people all the time. Like you need to marry yourself and be in love with yourself.  I came across that thought when I was younger, trying to heal from body image issues as a teenager where I just kind of reached this point of, there’s literally nothing stopping me from enjoying my life and enjoying my body and you know, freeing myself from feeling like I’m not good enough. It’s my own head that’s holding me back. If I just completely and authentically decided that I’m perfect. And I look exactly the way I want to and that I like love every inch of my body. Then I will just have a good time and it’s not actually going to impact anything in my life. It will just make me feel better.

With this advice I will be planning my own self-wedding in the near future.

What is one book that you think should be mandatory reading

Liv: Ishmael, by Daniel Quinn. It pretty much changed the way that I thought about the world. It’s him explaining his theory of how the human race should be and where humanity went wrong and how we could ensure the longevity of humans existing in harmony with nature. He proposes that humanity began the path towards a destructive and unhealthy culture with the rise of totalitarian agriculture. And also with the forgetting that humans lived for thousands and thousands of years before the “dawn of civilization”, when we pivoted from the hunter-gatherer lifestyle and began expanding as a society to this place that’s unsustainable, trying to dominate every other life form on Earth. It’s so fascinating. It’s all woven into a story about this young man who meets a wise old gorilla named Ishmael, who is in a cage and starts talking in his mind to this man. He imparts his theories about the flaws of modern humanity. It’s a great critique of the ways our society is causing disharmony with the natural world.

I ended by asking Liv if there were any questions from the list that she’d like to respond to. She mentioned that she and her partner jammed one in particular. Her response is thoughtful and tells us a lot about people in her generation and the day-to-day thoughts that they experience.

I would travel 400 years in the future because I want to know what happens with this whole climate crisis thing so that I can figure out if we do reach a place where we can live in harmony with the environment or if the human race is still alive; if things collapsed because of our inability to get our crap together. And then I would know if there are no humans, I could just relax about being so stressed about climate change and activism and I could just go get a house in the forest and chill out and not worry about raising small activist children. But if there are leaps and bounds to be made, I would know what direction to take that kind of activism. I feel like I already have my role in my life as a healer. I’m at peace working towards that. But there is this other layer of being my age and being of the age that I’m probably going to have kids and have to raise them up in this kind of world. It is heavy, always thinking about climate collapse. I am really responsible for me doing the most I can and raising kids to be really strong activists to save our earth. They will really feel the impact of it. My kids would and yours too. I feel it’s just such a big thing in my life.

And that is from the heart and soul of the wisest 22-year old I have yet to meet.

With that, I am off to listen to this on repeat. You can purchase the digital track here.

Canadaloves.ca is honored to highlight this soulful human as our second Friday Featured Female.

Cut Yourself Some Slack

Our Faithful Frontline. Our contest came to a close and here is a beautiful...

Customer of Realtor Sends Steak Dinner to say, “Thank you for selling my house.”