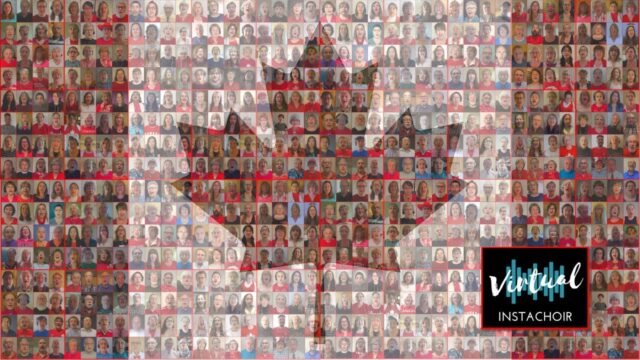 On July 1, Canadians everywhere celebrate Canadian confederation -or- Canada Day. While some commemorate from their backyards with a grill and sparklers, others take the time to consider the price that’s been paid for our Canadian freedoms – of which there are many we often overlook.

Mike is a videographer at MOVINPICS by profession and his wife Michelle Odendahl sings in an a cappella chorus. Via Michelle, Mike met Jordan Travis, a vocal coach and chorus director. Over the years, Mike’s friendship and professional relationship with Jordan grew, and, in 2019, Mike and Michelle partnered with Jordan to form InstaChoir.

“The concept was to provide a singing experience for all levels of talent. Our slogan is ‘One Night, One Song’,” says Mike. “Each InstaChoir night is made up of random singers, some who have participated before and some who are new.”

The name of the song, its score, and the recording date was sent out via social media, and a venue would be booked whereby a group of 80-130 people could come together to sing, with no rehearsal. Jordan would teach the three-part harmony, then the recorded song would ensue and it would be uploaded to Youtube.

Because of the restrictions put in place due to COVID-19, the choir could no longer be held in person. Mike and Jordan needed to change the way they organized the choir’s rehearsals and performances. In April, they planned a virtual choir with prospective participants submitting their vocal videos by simply recording themselves singing along to the provided tracks using their cell phones. The video got thousands of views in the following weeks. And an idea was born. How about recording the national anthem with people all over the globe?

Leading up to Canada Day, more than 300 people from around the world (Holland, Malaysia, China, Hong Kong, Bolivia, Spain, Germany, the UK, and New Zealand) submitted pieces to be included. Soloists were added, and many talented Canadian vocalists were eager to be involved. News outlets began to hear of what was going on with InstaChoir, and the video was played on several regional TV stations on Canada Day, and on CBC’s The National. By the 4th of July, the video was viewed 110,000 times via social media outlets.

Over 300 people – the majority, strangers to each other – synced harmoniously to create a beautiful tribute to our country.

Isn’t that what happens when we create something so magical you can see it, hear it and most importantly, feel it.

What can polar bears teach us about polar opposites?

Our Give Guide. Shop and make a difference