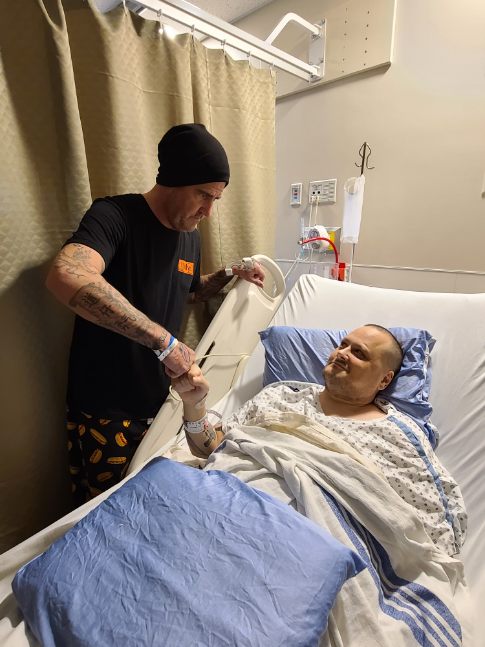 Skully White describes himself as a 51yr old immature, tattoo covered, kool aid drinking, Sinatra loving, dirty minded, romantic at heart, hotdog slinger. And yes – those are all his own beautiful words.

You may have read an article in the Vancouver Sun, or seen some trending social media posts this past week about a man from Abbotsford, BC donating a kidney to a customer that used to frequent his hotdog stand Lullys Food Experience in the Canadian Tire parking lot. We reached out to Skully White, and he was kind enough to give us an hour of his time the day before Christmas. He is open and honest and we are so thrilled we got to jam with this guy who has a massive heart.

Tim Hiscock’s family had been customers at Lullys hotdog stand for a few years but other than that, they didn’t have any interaction. In December of 2019 the family was coming out of the store and ran into Skully. They told him that they just found out that Tim needed a new kidney ASAP. Skully asked what the criteria for donating and we told him the donor had to be B+/- or O+ blood type. He quickly said “If I’m a match you can have mine”. Two days later, Skully discovered that he was O+ and that was that.

Suddenly, Skully and Tim would find each other at random places around the city and their brotherly relationship was born. They tease and joke and banter and at the end of the day, Skully commented on how Tim and his family are just great people. Tim’s wife Cindy sent Skully a high-impact message in November, that describes just how difficult Tim’s life had become.

After a long road of testing, Skully would meet Tim at the hospital on December 14, 2020, dressed in a hotdog costume – to do what he said he was going to do.

While many people might think that “they could never” donate a kidney, Skully challenges that thought/fear. 48 hours after surgery, Skully was at home walking his dog. And nine days later, he was moving a mattress box. I know this is true because it arrived when we were chatting. I saw him schlep it in with my own two eyes. Both Skully and Tim had remarkable recovery times, and their story is noteworthy from the get-go.

What did you learn about yourself?

Skully first mentioned that he didn’t like it when strangers approached him saying he was an angel and like comments. He did have an encounter, however, with a man on a Friday evening right after closing his stand who drove 45 minutes to share a piece of his heart with Skully. He mentioned that he was grateful for what Skully was doing and said that there needed to be more awareness of the disease. He had lost his wife to kidney disease just two days prior, and when Skully learned this, his conviction solidified and he knew that what he was doing was right despite questions from some of his concerned friends.

We asked Skully what he wanted people to know about the experience.

Skully: How easy it is. How amazing the reward is. You are taking someone’s life that is complete shit. They are dying and the people around them are watching that person die.

And he’s now watching his kid graduate, he’s watching his kid get married. He’s watching his grandkid sitting on his lap. He’s watching his wife and him going on vacation, retiring, living a life versus being on a deathbed. That’s the best part about all of this. I never even knew anything about it other than that you could live without a kidney. So I agreed to it when I found out my blood type. You want to hear the funny part. My parents and family don’t know that I did it.

True. Despite the numerous interviews, news coverage and trending social media posts, Skully’s parents still don’t know that Skully donated his kidney. He wants to tell them face-to-face and also to share a certificate the was presented to him from member of parliament, Ed Fast, that states:

Canadians are generous people recently for the 16th year in a row Abbotsford mission was named the most charitable region of Canada. The average annual donation to charity in my community is an astonishing $840 per person. Abbotsford is home to numerous chairs charities faith communities, including Cyrus Center, Life Recovery, Food Hunger, and the MCC, all of which support the poorest and the most vulnerable among us recently in Abbotsford man took generosity to a whole new level by offering the gift of life. Local hot dog vendor Andrew Skelly white heard that one of his customers was very sick and desperately needed a new kidney. Skully bravely stepped forward and in the process of donating one of his own kidneys to save his life.

Skully and his community in Abbotsford are responsible for so many acts of kindness and generosity. They gifted a family a set of bikes after their son had his stolen two days after receiving it for his birthday, they paid two-months of mortgage to a family whose son was mauled by a dog (and they got him a dilated up PlayStation to enjoy while recovering), they helped a single mom and her three children have a Christmas to remember, and the list goes on.

Tim’s wife, Cindy, set up a Go-Fund-Me page for Tim as he’ll be taking a few months off to recover before slinging hot dogs again.

In the meantime, Skully has offered hotdogs for life for anyone who signs up to be a donor. He says, “Not that they’re going to want to eat a lot of hot dogs because of the high sodium content, but whenever they come by, they can have a free hot dog and a drink for the rest of their life.”

Skully might think he changed just one life. We think his choice to say, “Yes!” is going to change many. It’s powerful, and it’s the epitome of what wholehearted kindness looks like. We’re quite certain that his action was a domino in a series of selfless acts we have yet to see, or better yet – be part of.

Meet the Jewelry Brand on a Mission to End Sex Trafficking